Greets from IOWA, no wait ... Chicago 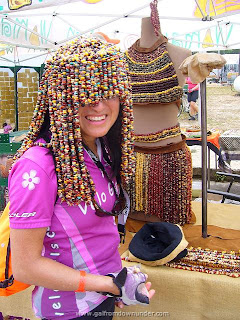 One of the many things you can buy on RAGBRAI My RAGBRAI shots (the photogallery doesn't work that well in CHROME) I've just returned from bouncing around like an email selling Viagara .... NY, Philly, Texas, Eugene, Seattle and finally IOWA, where I rode across the state with 10,000 others on RAGBRAI. Including Lance, who, at all times, seemed to be riding his bike just outside my field of vision. After many 'Where's Lance?' moments I lightheartedly accused his yellow and black clad platoon of fundraisers of being paid to say 'here's over there' while pointing in precisely the opposite direction. I saw one guy who I swore was Lance except on dropping my gaze to his shoes I saw a pair of sandals. Would Lance wear sandals? If he was wearing ballet slippers with a large gold button on the toe I'd know it was him - I read somewhere he was dating a NY fashion designer called Tori Burch whose signature creation for 2007 are those very slippers. B
Post a Comment
Read more
More posts