Showing posts from February 7, 2010
Show all 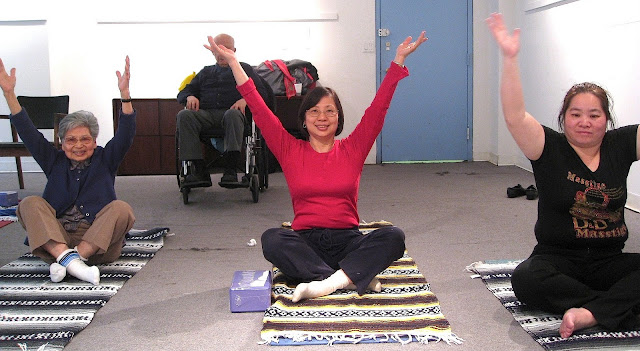 "Lynette, tell them about your yoga class. LYNETTE'S GOING TO TELL YOU ABOUT YOGA!" Yehudit is gathering people around one of the giant round tables in the cavernous community dining room. Some people aren't moving, so I won't get their attention. Most are already walking out the door. There's at least two generations of a Chinese family with a translator in front of me. Someone asks if I can speak Spanish. "Sufficiente para sobrevivir," I answer. I start to describe some simple movements and talk about Ujayi or "Darth Vadar" breathing. "Slower," says Yehudit as we raise our arms above our heads. I announce that we will be doing standing yoga in my class. I catch a glimpse of a Chinese gentleman in a wheelchair just as Yehudit says, "what about people who can't stand?" "We'll be doing sitting postures as well," I say. Thus began my induction to volunteering yoga at the Hudson Guild S
1 comment
Read more
More posts