*TIKIT ON TRIAL Part 1 of 3: Is it a trusty commuting companion? 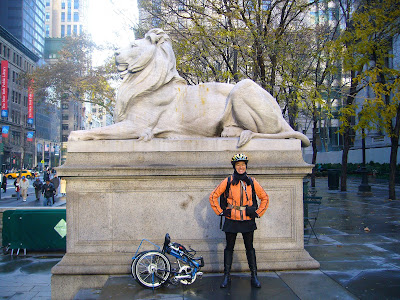 Reproduced from the Bike Friday blog ' Patience' , one of two lions guarding the the Beaux-arts building of the NY Public Library, says it's only a matter of time before folders may cross its threshold ... The Green Building logo proudly etched on the doors of 7 World Trade Center where, despite assurances, my unfolded bicycle was roundly rejected - remember, if the bike folds, fold it, if it doesn't - get one that does.  "The tikit experiment is terrific. What a fantastic baseline to judge accessibility by. I've never heard of anyone doing a survey like this - people have counted bike racks but not access to safe storage. A bit of Michael Moore to rally round. It gives me encouragement to try the same thing in Ithaca - where enlightened talk is cheap." - Andrejs O, BF Club of Ithaca . "I just watched the office building clips. I think taken as a whole they give a nice sense that the only "issues" with riding a bike to work are mo
Post a Comment
Read more
More posts