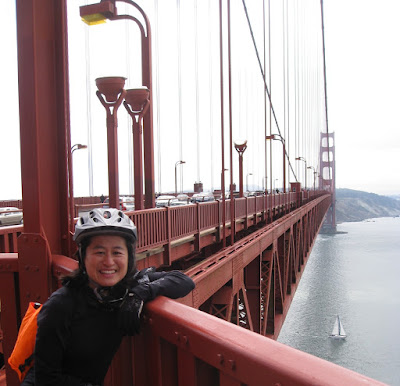 It was terrific to be able to actually use the loaner folder for John Chamberlain yesterday, on a quick spin out to Rodeo Beach. I put out a casual word, and John Trevithick popped up. I knew I recognized his name - he'd sent along this article about the "Trevithick train" for the BF website. I never forget an email address! My host Paul Skilbeck claims this loop - around 10 miles each way - they perfect wake up call and post work spin. Easy in, easy out, and there's always Sports Basement to blow some non-discretionary dollars in on the way back. Which is what we did! Rodeo Beach is way over to the left of the above picture. My swansong was, of course, a "healthy" junk food blowout at WholePaycheck. The last remaining slices of pizza at 9pm, the kale salad we all want the recipe for, Barbara's Cheese Puffs (resembling Twisties from downunder), and the kind of wicked little gateau the world doesn't need but stimulates the economy and spi
Post a Comment
Read more Folders not forgotten: Robert van der Plas of Cyclepublishing.com shows off his latest book: Bicycle Technology, which, unlike many bicycle books, has a decent section on folding bikes. Spot the Friday!  Another people-packed day in San Francisco. Working backwards,  I had dinner with Robert van der Plas of cyclepublishing.com , a small but earnest  publisher of informational and educational bicycle titles. I was impressed to see one of his two new books, "Bicycle Technology", include a certain small, strange little bike that I ride ... The other book, about the black cyclist Major Taylor, brought back memories of one of my first events at Bike Friday way back in 2002: presenting to the Kids of B.I.K.E. group for which Major Taylor is the father figure: http://www.galfromdownunder.com/kidsofbike/kidsofbikestory.html Dan Kaljian, Paul Skilbeck and I had dinner with Robert in his neck of the woods "9th and Irving", south of Golden Gate Park. I could not
2 comments
Read more
More posts