Any Old Iron: a true Brit friend opens a Lower East Side store 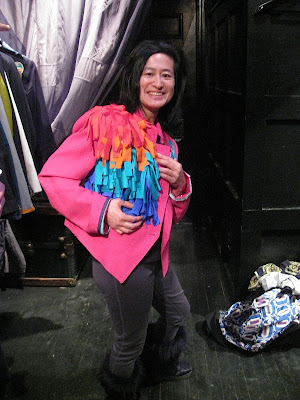 Right: "It's very gay!" said friend Justin (also very gay). A reworked jacket by Red Mutha. MOVIE:  March 4 soft opening Hot on the platform heels of reminiscing old times with former roommate Julia Clancey , I followed up next day by attending the soft opening of her brother Andrew's new Lower East Side store,  Any Old Iron. It's been 13 years since I crashed on Andrew's sofa on my way from End to End in the UK, and he's since become a "curator" of men's fashion - vintage, eclectic, avante-garde - 100% True Brit. I walked in the door and noted that Andrew hadn't changed one bit. He's the same warm, welcoming and 'tude-free Andrew Clancey from when I knew him - just a little bit older, like all of us (sigh). His collection of unisex clothing includes the brand Red Mutha from Brighton, UK, which specializes in "reworking" old jackets. Meaning,  take 1 destined-for-Goodwill jacket, do a bit of nipping and tuckin
2 comments
Read more
More posts