Showing posts from November 2, 2008
Show all

Barack Obama and the Power of Positive Discrimination 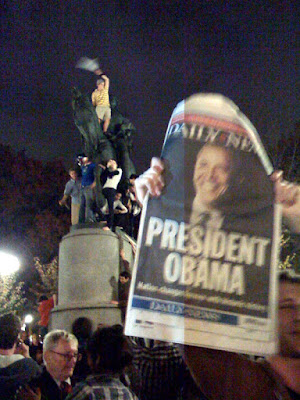 Thank you to Peiheng Tsai for this cellphone image, taken in Union Square, NY, 1:18am on November 5 It's the day after the election. With the line "the election wasn't about color, it was about the economy" being bandied about, I, as a person of color, beg to differ. BARACK OBAMA: The Power of Positive Discrimination is my take on my FastCompany blog. In that post you'll see I also mention Little Person (that's dwarf or short statured person - but never midget) Dan who, like Obama, is doing great things for his minority group - by being out there, and being successful. Celebrate our differences, because as Obama shows, they're the true catalysts of change. Watch Dan in action . Speaking of little people, I saw one enter the same pizza place I was in. I found myself avoiding looking at him for fear of being rude - how many of us know that feeling? OK, now imagine you are that little person, feeling people's eyes shift away from you but know
Post a Comment
Read more
More posts