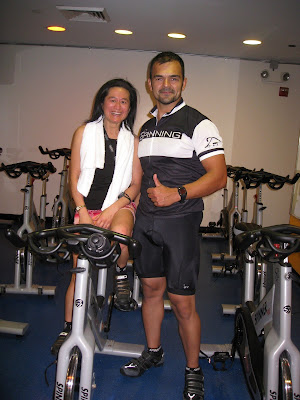 Is my face red ... SPINNING instructor Anthony Musemici says you don't need a long and winding road to get a pretty decent hill, interval, sprint, and endurance training  on a bike. ... now add a bit of yoga to the mix and what do you get? SpinYoga! A perfectly Peaceful Warrior pose at the free  Chelsea Piers "Yoga On the Pier" classes, Aug 2010. I just completed a 9 hour Spinning Instructor Orientation at New York Sports Clubs. Now, what is a seasoned cyclist like the Galfromdownunder doing riding a bike that doesn't go anywhere? As one participant confessed in the pre-course stairwell speeches ('cos you get fitter riding the stairs than the elevator): "I was a bit cynical about it all until I tried it." Ah yes, one winter in NYC where biking through a bunch of snow isn't appealing, and I discovered, thanks to a two-month intro membership at the Equinox gym down the road and some guest passes from the stunning Chelsea Piers across the r
1 comment
Read more 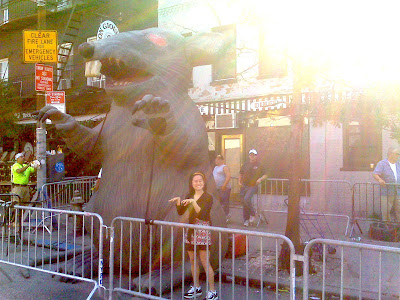 " Ratting on the fat cat over the road on 21st and 10th Ave, Chelsea, Manhattan. Have you seen this large inflatable rat around town? I always thought it was a giant advertising balloon for a vermin extermination company doing their mouse-mulching in the building immediately behind. Clever! But no - it's actually the protest mascot of construction industry unions. "Come in! Take photos!" said a picketer in a hardhat plastered with a  "UNION" sticker when I stopped by with that typical "what's up with that?" expression on my face. He pointed across the road to a wooden skeleton of a building alive and crawling with the sound of hammers and hi altitude girder-walkers. "The owner is employing non-union workers at minimum wage, like five bucks, no benefits." I looked around at the apparently unionized throng languishing behind the barricade, all dressed up, iphoning, and nowhere to jackhammer. "A union member gets p
Post a Comment
Read more
More posts