The Evergreen Cemetery: Where Asimov whistled while the Chinese boiled 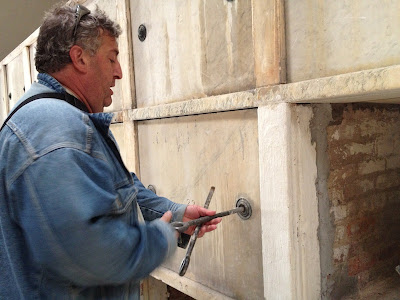 All in a day's work: Former gravedigger and now cemetery historian Donato Daddario demonstrates the key that releases the two rosette-shaped screws and releases the marble faceplate from a compartment. "THE boiler would come by with his two big cauldrons, disinter (dig up) the bodies and boil 'em up to remove any remaining meat. He'd then chop up the body at the joints, box up the bones and they'd be loaded on a ship bound for China ..." In case we needed a better visual, the ebullient Donato Daddario whacks a cleaver-shaped hand against his elbow and knee. "We used to say, they used the broth to make chop suey!" We happened to stumble across Donato during a personal tour of the  Evergreens Cemetery  led by distinguished historian and über sailer  John Rousemaniere , author of   Green Oasis in Brooklyn: The Evergreens Cemetery 1849-2008   Heading over the Brooklyn Bridge with galpals Pamela Talese and Cathy Eatock (from downun
Post a Comment
Read more
More posts