It's the end of the first week of my post-Bike Friday life, and I yet I still find myself subconsciously doing things one could call "work related".

Since May is National Bike Month, I came up with the idea of giving the seniors at the Hudson Guild - where I volunteer teach yoga - a little thrill by riding it around their lunchroom. 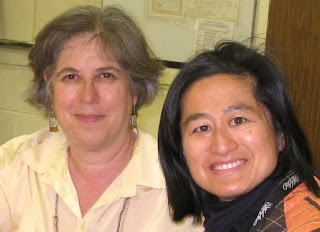 "Great idea!" said Yehudit Moch, the activities director, tasked with the tireless work of coming up with programs to keep seniors active and engaged. "Let's called it Folding Bike Fun, and do it at 12.45pm, towards the end of lunch, before they disperse."

For disperse they do - the attention span is short, and hearing and vision loss doesn't help.

The night before the demo I had this last minute idea to invite some local senior cycling friends to the show. Four names came immediately to mind: Tod Moore (72), a bicycle tour guide who rides every year in France; Jesse Brown (70), former president of the local bike club; Grace Lichtenstein (69), journalist, and Dolores McKeough (68), a cross country bicycle adventurette.

All but Grace were Bike Friday owners, and all were retired. All four were experienced, long distance bicycle adventurers, but get this ... not in some distant past youth, but right now, in the best years of their lives.

I was amazed when all four responded, and then utterly blown away when they actually showed up.

Tod with his tikit, Jesse in full lycra on his Pocket Rocket Pro, Dolores on her Bianchi and Grace on her commuter bike, just fresh from a business meeting in Midtown. 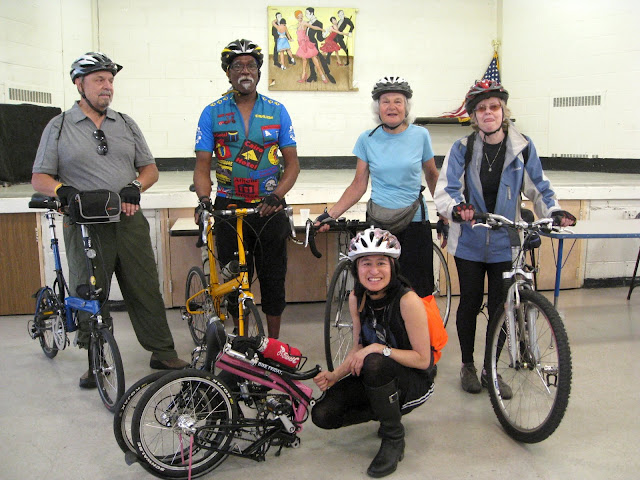 We all tucked into a meal of baked fish and couscous, discussing the sad state of senior centers - group by group, they are being closed, starting with the smaller ones that don't serve meals. The Hudson Guild serves 150 meals a day, to members who come from as far as Queens, so it may be last on the list.

Tod dismissed the somewhat austere surroundings, noting that "It's a way for people to get together, when old age can be so isolating."

Indeed, I sat next to a 83-year old gent last week from Colombia - a carpenter, who lives in 1 room, and whose sons in Las Vegas have not contacted him for years. He thanked me for talking to him. "I often try to talk to people but they turn away," he said, revealing as much about the difficulty of aging in a world where we worship a youth we all lose.

12.46pm. Yikes! People were already starting to filter off to other activities - hurry, hurry ...
I went and grabbed Guild social worker Cheryl who gave us a nice introduction - winging it admirably without any briefing about folding bikes.

Jesse explained how the bicycling is great for your joints, as it's not weight bearing. He did some impressive slow and right turns in the space to the impressed murmurs of all present, and in his lycra-suited body of a man 2/3rds of his age, looked like Major Taylor reborn.


"You can get your leg over it," said Tod in his rich, professional radio-announcer voice. He straddled the Bike Friday tikit, adding that "getting your leg over a regular bike gets harder each year." Tod revealed he is a polio survivor, but who would know ...


Dolores demonstrated the low stepover point with her Bianchi, the bike she rides "when she hallucinates she is younger than she is." She's rode 3100 miles cross country San Diego to Florida, fully loaded and camping, "difficult, but not difficult enough. I've signed up for a 4300 miler - on my Bike Friday, puling 40 lbs of gear and camping." Awed applause.

Grace, another 4000-mile cross country adventurette, apologized for being the only oldie sans foldie, but showed how her commuter steed was rigged up to take the papers she'd ferried from a business meeting just prior.

All four of these super seniors related their ongoing cross county and country touring experience,  filling the room with a real sense of "when over-the-hill means, nice passing you young, man."

"Enough about me, what about you?" said Dolores to the slowly thinning group. "I like walking too. Start walking a little, and then you can walk more. Start biking 2 miles, and you will soon bike more." Or words to that effect.


A couple of energetic seniors rolled up for a test ride and a sit. "It's a lot lighter than my clunker!" said one. "And it's PINK!" 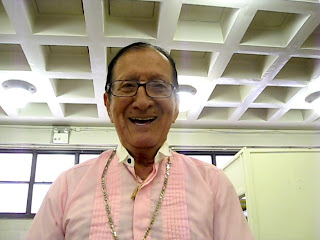 Vincente, the centers' oldest member at 96, boogied up to us in his pink ruffled shirt, pointy shoes and gold chains. Ask him and he will produce his card that says "DOB, 1914, Ecuador".  He teaches salsa, and is always dragging me up to dance when I go on there. When I leave, I try to get other senior women to dance with him. 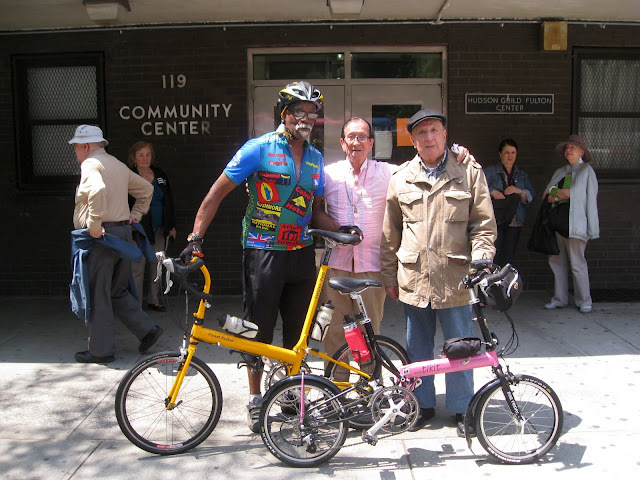 Another sprightly, 73-year-young Chinese senior told us how she climbed Mr Ranier last year.  Her advice? "Keep moving, be optimistic, keep sharing what you have in everyday life to be physically fit."

I maybe be newly underemployed, but with this community, I feel fully engaged.

Dolores said…
It was fun being part of the Senior bike presentation. The four of us made brief remarks; no rambling. Thanks Lynette for inspiring me; from the short presentation we made you were able to turn it into a video and a story. Yesterday I biked around the City on my BF with a camera in my pocket. I took several pictures; went home; and opened the journal I have been neglecting. Now I have a photojournal thanks to you.
May 18, 2010 at 6:41 AM

Anonymous said…
Hey Lynnette and Delores!
I know a handful of people in New York City. Imagine my suprise to learn you know each other and I know you both! Lynnette it was great to meet you at the Nat'l Bike Rally, your movie and presentation were great. Delores I hope you're having the time of your like on your current cross-country tour!
June 15, 2010 at 6:54 PM