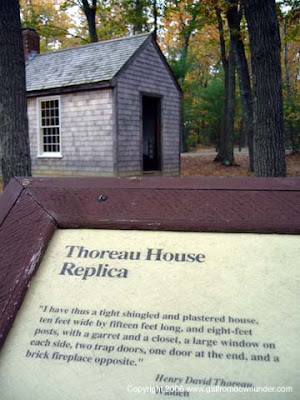 The house that Alison sat looked a bit like this, but unlike Thoreau's digs, was way more than a stone's throw from a home cooked meal and hoogs (that's hugs in Scottish).

WHEN you're asked that standard contest question, "Who do you admire the most in the world, and why?" - just who comes to mind for you? Someone famous? Infamous? Completely unknown? When asked this 10, 5 and 2 years ago, I thought of the same gal each time - a friend I met in my travels called Alison. More about her in a moment.

This question came up recently in a heated, though chummy debate with a couple of friends about Henry David Thoreau, the eloquent writer/philosopher/inward excursionist who's practically deified by the general public for his contribution to voluntary poverty, or rather, simplicity. Don't get me wrong - he wrote a great book, but when I read that his little cabin was a stone's throw from a home cooked dinner with a loving and supportive family - gimme a break! It's a bit like hailing those reality TV actors on 'Survivor' as survivors. Let's call him anything else but not a "true survivor." (To his credit, Thoreau states clearly in his book that being a hermit was not the object of the experiment, and that his cabin was not in wilderness but at the edge of town, not far from his family home).

And make way for Alison. Here's an excerpt from one of my travel stories about my time as a trainee chef at Mulcahy's restaurant in Ireland. The full story is here. Thoreau's experiment was valid, but was just that - an experiment. Unless you've been stony broke, you don't know what it means to be, well stony broke, and I include myself in that category. I've been sandy, but not stony broke.

I was sitting on the front lawn belting out exercise three on my harmonica, watching Joanne transplant a rose bush, when up strolled Alison, the woman I'd hostelled with in Dublin. She was the catalyst that got me traveling to this town in the first place - she lined me up with my short-lived waitressing stint at the Italian restaurant in the Other Street.

Alison was a wily Scot of indeterminate age who lived day to day and was hugely distrusting of the System. Consequently, she refused to sign anything that would give her any kind of ID. A mind as sharp as chef Bruce's favourite carver, she'd done an Economics Honours degree in her youth, bought some clothes and makeup for and interview, saw "everyone else desperately doing the same", summarily burnt clothes, books and piece of paper, and started living by the seat of her tie-dyed pants. To feed herself and her quest for total independence from the System she'd done just about anything and everything, including" living off air" for four years in a remote part of West Ireland. Her first job after destroying her degree was tutoring economics students by day, and by night, donning a "tartie lettle skert" as a cocktail waitress trying to extract as much money from bored businessmen as their expense accounts didn't allow.

Another time she worked in a pub making pies, where she spotted an ad in an old newspaper for writers for the Economist, one of Britain's most prestigious business magazines. She wrote to the editor explaining what she was doing, making pies, and what she would really like is a job writing for the magazine. She got an interview. She didn't get the job, she says, because she failed the booze test: the editor managed to get her plastered on whisky, proving that if she had to get her subject off kilter using the age-old inebriation technique, she'd be the one left under the table - sans the information the magazine had sent her to artfully extract. The editor's parting words, however, were, "Never change. Stay the way you are and you will go far".

She had indeed gone far, at least when she owned a passport. She hitched across America on no money, after blowing every last dime  in the first three weeks of a two month holiday because she didn't realize "how expensive traveling is."  It was only then, she said, that the adventure really started. She gave new meaning to the notion of Scots being thrifty; she camped with gypsies; she got thrown out of a truck in the middle of nowhere when she refused to pay "in kind" for her ride. But more often than not, she said she found Americans disproportionately helpful and caring about her plight. I suggested she write a book called "America on $0 A Day - Doing it the Scottish Way". She shook her head. "These memories are for my enjoyment and whoever I deign to share them with".

Alison was someone I had absolutely no qualms hitching anywhere with. If anything, she should have had qualms about hitching with me, which is exactly what happened when we decided to make the most of my day off and hitch to Killarney, about 12 miles away. The weather was grand, perhaps a little too grand for what turned out to be a hot and completely unsuccessful attempt at getting a ride. We got as far as Kilgarven, the next town, and stood for over an hour in a truck layby lane in the blazing sun as carloads of tourists shot by behind tightly closed tinted windows. Alison, who had never failed to get a lift in her life, remarked that it was probably because there were two of us. She thought it an insidious reflection on the male race that a girl hitching solo is subconsciously seen as a potential shag in the deepest sinkholes of the even this most honourable male mind.

"Heard of  extremist gardeners?" she remarked suddenly when the hundredth car had zoomed by and we'd run out of things to whine about. These, she said, were radical permaculturists who don't believe in digging, lest the 'lattice' that runs throughout the soil planet-wide is disturbed. Thus, "turning a sod out the back could give a sympathetically aligned gorse bush in Botswana an inferiority complex."

Read the full monty about my time as a trainee chef in far west Ireland.

UPDATE: Alison now operates a florist shop, Mac and MacKay, near Oxford, UK. She's come full circle. Proving that in a modern world, you can be anything you want no matter where you've done - perhaps because of it.
joy/woe of travel

It's not a Junket. It's a Job - The making of my "Best Job in the World" submission

This is my submission to the Queensland Tourism Island Caretaker Job , along with the 30,000 other applicants (including Dean Martin's son, the Edmund Hilarys and Jacques Cousteaus of the world, and even an hilarious Osama impersonator). I use it now as part of my bio/resume, to demonstrate what I can do in 1 minute with a pocket digital camera, a guitar, a Mac, and an old tatty straw hat. My friend and multi-award-winning Art Director downunder, Sue Carey, challenged me to defend my self-styled title as a Multimediaclast - so this is for you, Sue! Judging from the staggering caliber of applicants, I'll be surprised if it floats (ha!) but oh, I do so love a 1-minute creative challenge. I can also I console myself that I've been doing this exact same job for the past 5 years as the Customer Evangelist and chief content creator for Bike Friday. The only difference is my butt is planted on a bike saddle, rather than a boogieboard. For tech trivia buffs, here's
Read more