NEW VIDEO: Booking it along the Amazon with PACTOUR

DVD Sleeve. Click on image to read it.
UPDATE: A DVD of this tour is available Feb 2012 from Lon Haldeman, haldeman@pactour.com (Original 2004 DVD: 16,000 Feet on a Friday)
Currently, this DVD is an important fundraiser and not sold as a separate item, but given as a gift for donations of $100 or more.
Donations for these Peru Projects (administered by FPC Global Outreach) are always welcome and appreciated. As you can see, they are put to good and immediate use!
To donate, contact Lon Haldeman, haldeman@pactour.com  ABOUT THIS TOUR | LON'S BLOG


I'M JUST BACK from my second expedition in Peru with cycling legend and tireless philanthropist Lon Haldeman of PACTOUR.

The 17-day, non-stop itinerary involved several charitable projects:  a shopping trip for a home for abused and homeless girls;  delivering books to remote schools along the Amazon;  visiting two schools that PACTOUR built near the jungle town of Iquitos; inviting street kids to an impromptu meal, and buying supplies for the Puerto Ocopa orphanage that we stumbled upon back in 2004. Lon has led this same trip almost every year for the past decade, so it's become an ongoing concern, attracting donations from many of his cycling clientele.

My first visit, in 2004, resulted in a feature-length video, 16,000 Feet on a Friday: Biking the World's Highest Paved Road which portrayed, among other things, my gasping, slightly blue mug as I tried to bike over that 16,000 foot bump at a centipede's pace ... here's 1 minute of gasping for you.

This year, we drove it, while some of the crew biked sections. Without the gradual acclimatization afforded by biking at a steady 5-6 mph, we all got a little bit sick, despite ingesting No-Doz, Coke, Mate tea, loads of coffee and unbearable amounts of sleep-depriving Latino rap courtesy of every taxi driver's mp3 player.

1. Shopping for the Chosica Girl's Home. A generous Dutch non-profit runs "The House of Gina," a girls home in the attractive town of Chosica, 35 km outside Lima. It's a safe haven for abused and homeless niñas, and our contribution was to take them all shopping to buy some treats.
Little Aracely (below), who Lon met 6 years ago in the remote, dusty town of Yurinaki, is now one of the local PACTOUR crew. Although she has a loving mother, her family are very poor and she is lucky to have secured a spot at the House of Gina.

The cyclists in the crew included four Americans and two Peruvian competitive cyclists - sisters Alessandra and Samantha, currently national champions in their age groups. The cyclists leapfrogged the rest of the crew in taxis over the 3-day stretch from Chosica to Tarapoto, the jumping off point for boat trips along the Amazon and its tributaries.

2. Delivering books to remote schools along the Amazon

An unforgettable segment of the trip was the 3-day, 2 night banana boat cruise from Tarapoto to Iquitos along the Amazon and confluences.

Being the "first class" passengers at $US60 per person, we slept in cabins and hammocks on the top deck and were served three really quite decent meals a day, prepped by the cook in the deck below.

After bundling the books into 6 piles of 2 packages - books and writing/drawing materials - we were dispatched by motorized dugout canoe at various points along the Amazon, popping up in remote villages and surprising a number of tiny schools with our humble offering.

Interestingly, some officials from the local Dept Education happened to be on the boat doing their rounds of inspecting and testing teachers in remote schools. Apparently, students must attain a certain level of skill in certain subjects or the teacher gets shown the door (if there is a door) - according to Vioricka, our local Director of Operations.


These two schools, built entirely from donations collected by PACTOUR, are located at kilometer 9 and 46 outside the northern jungle town of Iquitos. The Jack Wolff School, with almost 600 kids, prepared a grand welcome of placards, dances, poetry readings and food. Then the teachers got down to business to discuss their needs for the coming 2012 school year.


The Joseph Pulley School is a hot, dusty, 4km hike into the jungle. It was named after the father of an avid PACTOUR cyclist., Brenda Pulley. The site consists of the school building, a hut for the teacher, a hut for the live chickens, a cooking stand and a river nearby. The teacher, Vioricka's mother, spends 5 days a week living in these spartan conditions, and returns the city of Iquitos on weekends.  Many of the children walk 1 hour or more to the school from deeper in the jungle each day to attend class.
4. Street kid parties

Like a "flash mob" event, we hosted two spontaneous meals at a local restaurant for kids who looked like they had nowhere to go home to. We handed out individually numbered invitations and asked them to show up at the restaurant at 6.30pm. A sign that Peru is become more affluent: some kids refused the invitation, and those who accepted looked fairly well looked after "which hasn't been the case in previous years," said Lon.
I wondered if this benevolent gesture might be misinterpreted by onlookers, given that my mother always told us "not to accept pollo from strangers." My concerns were laid to rest by a local guide:
"Peruvians are accustomed to foreigners stopping buy and doing kind things," he said.

5. The Orphanage at Puerto Ocopa


The Orphanage is at the end of a spectacular and often treacherous 300+ mile route from Lima to Satipo over the 16,000 foot Ticlo pass. 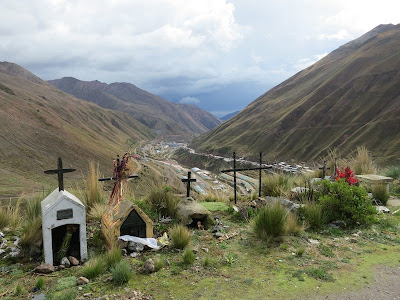 It's come a long way since we first visited in 2004, when a single nun looked after 85 kids whose parents had been killed (apparently) by guerillas. At the time, all cooking was done over wood, each child had one set of clothes, which were washed by standing and soaping themselves in the river and rain - and there was no electricity. 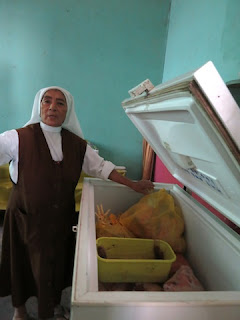 Thanks to non-profits from France and Spain the center now has running well water, electricity, three fridge/freezers and even a TV room.

Our crew included Peruvian champion cyclists Alessandra and her younger sister Samantha. Read about their rise to fame here. 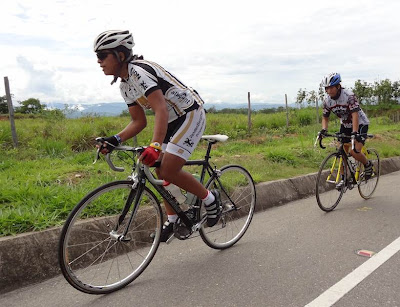 Thanks so much to gun cameraman Johnnie Behiri, who I've met through his spectacular review of the SONY DSC-HX9V on Vimeo. He provided life-saving online help in mastering the impressive little camera which shoots 1080p/60fps - yet it's still just a point & shoot. I really need hi-def video but with one-handed operation (the other on the handlebars of a bicycle) and this really did the trick!

More pictures on my Facebook page here
Read about this tour

Mary Ann Sprung said…
What a great adventure and for an even greater cause - helping impoverished, Peruvian orphans!!!

It's not a Junket. It's a Job - The making of my "Best Job in the World" submission

This is my submission to the Queensland Tourism Island Caretaker Job , along with the 30,000 other applicants (including Dean Martin's son, the Edmund Hilarys and Jacques Cousteaus of the world, and even an hilarious Osama impersonator). I use it now as part of my bio/resume, to demonstrate what I can do in 1 minute with a pocket digital camera, a guitar, a Mac, and an old tatty straw hat. My friend and multi-award-winning Art Director downunder, Sue Carey, challenged me to defend my self-styled title as a Multimediaclast - so this is for you, Sue! Judging from the staggering caliber of applicants, I'll be surprised if it floats (ha!) but oh, I do so love a 1-minute creative challenge. I can also I console myself that I've been doing this exact same job for the past 5 years as the Customer Evangelist and chief content creator for Bike Friday. The only difference is my butt is planted on a bike saddle, rather than a boogieboard. For tech trivia buffs, here's
Read more