Citibike NYC: the cross-town taxi you drive yourself

I caved. I have officially joined the Citibike program recently introduced in New York City. Now
why on earth would a die-hard foldie with two perfectly good, fast and fancy folders in her closet do something like that?
Convenience with a "C"

First, there are times when you are across town on foot, and you want to get back quickly without resorting to the expense of a cab, the lethargy of a bus or the claustrophobic cram of the subway.

Second, it saves my own bikes from wear and tear, especially when it's a bit damp out there.  Grit and road grime are the enemy of tiny New York apartment spaces where your bed and kitchen and living area are often one and the same. On that note, lucky the few who have dedicated downstairs bike storage in Manhattan ...

Third, it's a great workout. Think of a pedal powered Leopard tank. Every pedal stroke reminds me of walking on a treadmill cranked up high (despite the 3 gears).

Fourth, there are times when a folding bike just isn't convenient. Like the movies, where there's no place to stash it without it being a hazard. Or shopping in Bloomingdales, where you don't want to roll it around all 5 floors.

For infrequent users, there's a rather expensive $10 a day on-demand fee that you pay with credit card at the ubiquitous stations, for as many 30-minute rides you can fit in 24 hours. Yes, that means no parking it against a tree or leaving it while you enjoy a leisurely latte or movie - it's strictly for short-hop commuting.

There are some things a newbie should know that I learned the hard way. 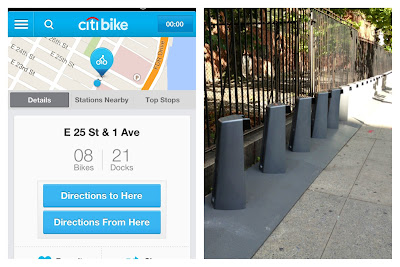 Handy Citibike App - but don't trust it for bike availability

The mobile app not only shows you were all the stations are, but tells you how many bikes are available so you're not late for your important interview 'cos you ran to an empty station.

However, as the above image shows, when I made for one of the supposedly 8 available bikes on 25th St and 1st Avenue, the station was bare.

So what happened? A Facebook friend says it's because they are being "stolen and chopped up for scrap - around $40." Someone on Reddit said in Paris, people were messing with them and tossing them in the Seine.  Or, maybe the app needs and the tech needs a bit of tightening. There is a team of worker bees who pass the day flitting between stations to "rebalance" the bike distribution.

Nope, they are not mandatory. Apparently a mandatory helmet rule is killing the program downunder in Melbourne.  Admittedly, even I hesitate to lug my traffic-stopping Nutcase Watermelon around for short hops.

Architecture professor, urban planning philosopher, bicycle zealot and author of Cycle Space, Prof Stephen Fleming (from downunder) believes that while a helmet is advisable, there are theories that head injury is less likely when cycling in a slow, upright riding position coupled with the potential nirvana of slower moving traffic. As in, if bikeshare programs like this can bring a critical mass of cyclists on the road, they may help re-calibrate existing speed and impatience levels.

I have already made several trips on Citibike just in the last week. No doubt all my moves are being tracked and I fully expect to start receiving coupons and offers based on my trips any time soon. If you're into big data, it would be very fun to watch the ebb and flow of bikes on some big lit up operations screen ...

@BehoovingMoving said…
I'm not sure how I feel about you riding something other than a bikefriday. It's as though a law of physics I learned in high school has been proven wrong. High praise indeed for Citi-Bike anyway, and thank you for reminding me of that awful concoction I made from every yoghurt tap in New York!
August 22, 2013 at 3:04 AM

@BehoovingMoving said…
I'm not sure how I feel about you riding something other than a bikefriday. It's as though a law of physics I learned in high school has been proven wrong. High praise indeed for Citi-Bike anyway, and thank you for reminding me of that awful concoction I made from every yoghurt tap in New York!
August 22, 2013 at 3:05 AM